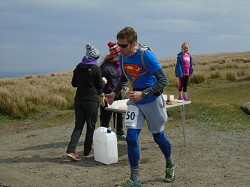 Well they don’t call it the ‘Beast’ for nothing! With my superman t-shirt making the wonderful locals of Maenclochog and Rosebush smile, I set off with around 70 other would be ‘Beast Tamers’ into the mountains to endure the 24 mile marathon of a lifetime.

The sun was beating down as we climbed up through the old slate mines at Rosebush and I was aware that I was using fluid up quickly. I am used to far shorter races so felt myself fighting my own pace as I tried to remember that this wasn’t all going to be over within an hour! My first six mile marker was the car park just above Rosebush which I hit a few minutes earlier than planned, I moved up into 10th place and took on the climb out of the car park and then the fun descent into the beautiful Gwaun Valley.

Between mouthfuls of Peanut butter sandwich and jelly babies, I worked my way back up out of the valley and on to Newport. Lisa and my wonderful support crew which included Byron’s daughter and grandchild were racing to keep up with me in cars along the roads. They missed me at the Gwaun Valley water station to be told that I was now chasing the front runners.

Feeling rather pleased with myself, I hit Newport (12 miles) well inside 2 hours with plenty left in the tank. As I climbed up out of Newport a sign simply said ‘don’t look up!’ which of course I did…..only to be confronted with Carn Ingli (the killer climb!) it was hand over hand stuff now as 9 minute miles turned into something closer to 20 minute miles. My legs were cramping as I finally reached the summit – but there was no rest.

I pushed on back to the Valley with various cramps going off in my legs but a smile on my face as I finally hit the 16 mile mark. Beautiful Lisa was there with more fluid and I charged on up a brutal climb towards the burial mounds. At Brynberian I realised that I had 7 miles to go and so pushed on with all my strength to climb ‘the beasts back’ which was the longest climb of the day. I overtook more as I half ran, half stumbled up the mountain ridge.

With just five miles to go, we started to descend for Rosebush and now the cramp really hit me. Through gritted teeth I pushed on as fast as I could and suddenly hit a second wind, gathering pace for a really strong finish to impress the locals who were still laughing at my superman t-shirt!

I ended the race in a very respectable 4 hours 13 minutes, achieving 7th place overall and winning a trophy for the fastest veteran (over 40’s) and another for second fastest local.

Today I have four black toes and some very stiff legs but I am really proud to have raised over £3,600 for Cancer Research in memory of my friend. Thank you so much to my clients who made my dream a reality through sponsoring and encouraging me.