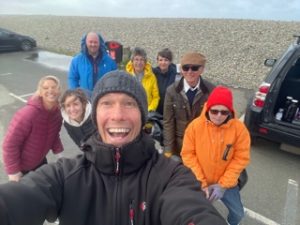 We met today for our 4th annual Thomas and Thomas Beach Clean. Once again, we decided that Newgale Beach was the best place, due to parking and the vast amount of pebbles that trap debris from the sea.

We were joined by seven wonderful client volunteers this morning, as we braced ourselves against the strong wind coming off the sea.  I forced cups of coffee and hot chocolate on everyone, whilst Bethan made an easy job of giving away mars bars and Katy handed out extra strong bin bags.

Then, equipped with our gardening gloves and bin bags, our elite group of beachcombing hero’s set off in different directions across the stones.

One of our clients (also called Darren) is something of a beach-cleaning legend! He marched off purposefully to a little cove he hoped would win him the greatest haul – equipped with his special picking up tool and elbow length rubber gloves – he was a sight to behold. The bar was set.

Mike and Sally are veterans of our annual beach clean, they wasted little time launching off in the opposite direction to Darren, efficiently ‘tweezering’ milk bottle caps out of the pebbles as they went.

Rebecca proudly represented the Douglas-Jones Mercer contingent – handing out DJM trolley tokens with true elegance (although she didn’t give me one!) She was partnered up with our long standing client Linda and together they promised to beat us all!

Michael and Judith had a long argument with the parking ticket machine but then they were thrust into the fray – scrambling up across the pebble mountain to do their bit.

I wondered around the car park for a while in case of any late-comers, picking up bits of paper and facemasks whilst Katy and Bethan went to encourage our small army and pick up all that they could also find.

Once I had lost the feeling in my face from the wind, I decided that a gulley over on the far side of the beach could be a great spot to find more litter, it was sheltered and I guessed that the stones here could be acting as a sieve for rubbish.

I was not wrong.

I was greeted by a truly staggering amount of litter caught up in the gulley – brought in by the sea. Bits of fishing tackle, rope, bottle tops, rubber, straws and plastic all needed collecting. I was saddened to see so much litter – but also slightly smug as I was now certain I could beat my legendary client Darren with a greater haul for the day.

I set to collecting. This was backbreaking work as my extra-large bag gradually filled with miniscule pieces of plastic and rope. About an hour in, I heard a shuffling of stones and there was Darren! He gleefully told me that he had already filled one bag and now he was onto his second!

We worked in tandem, scouring the stones clean of their micro-plastic forest.

Coming back off the beach, I suddenly realised that my hat had fallen out of my pocket. I turned to Darren and asked ‘you haven’t seen my hat have you?’

Grinning apologetically, he reached into his bin bag and pulled out my hat!

‘I thought this was a bit good for the rubbish’ he said.

You honestly can’t leave anything on the floor with Darren around!

We assembled back at the cars where more hot chocolate was consumed and we counted nine bin bags of rubbish.  It was a truly positive morning and a huge thank you to all of our clients who were able to join us today.

I think we will all definitely sleep well tonight, only I think I probably need to put my hat through the wash! 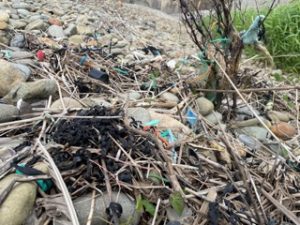