Tie me Kangaroo down!

In our daily Skype team meeting yesterday, I posed the question ‘Are we still in a bear market, or has a new bull market started’.  The answer from Katy was that she sees us as very much in a ‘Kangaroo’ market right now.

This is certainly a new turn of phrase!

A Bull market describes a market that is generally charging upwards, almost impervious to bad news.

A Bear market describes a market that is falling destructively, sensitive to any bad news at all.

It is fair to say that we have certainly experienced a global bear market over the past month or so. The impact of this pandemic has had far reaching consequences and the media just love to tell us how much worse it is all going to get.

I prefer to consider the facts. Let us start by considering what we have just lived through to date. I love charts, they show things much more clearly. Take a look at the following chart shown on the 1st of April by the ‘Market Watch’ publication (they are worth following on your phone).

This is fascinating. It shows the last 34 days of the current crash on the Dow Jones Industrial Average (DJIA) index in the US against the other historical major bear markets. 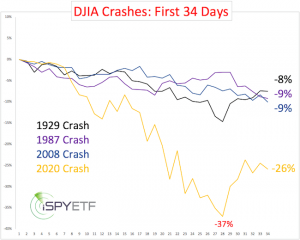 You would be forgiven for thinking that the recent crash was so terrible that the future must be far worse than any previous market crash.  However, the retracement of the graph from -37% to -26% was remarkably rapid and shows around a 30% recovery unlike anything that the previous historical crashes have displayed so early into a bear market.

One of the points we consider when looking at client portfolios is the ‘Fibonacci resistance level’.  Stick with me here, I promise it will be exciting!

Leonardo Fibonacci was a remarkable Italian Mathematician in the 13th century (see I told you it would all come back to Italy – see previous articles!).

The Fibonacci retracement is technical analysis that attempts to take extreme points on a chart from peaks and troughs and then draws horizontal lines or support levels.

The support levels are vitally important when considering a market that is in a bearish mood as it suggests where some sanity might prevail – due to horizontal trading lines that represent a ‘floor’.

These support levels also act as ‘resistance levels’ in showing whether a market has the appetite to start to break through resistance markers and begin to climb again – thus ending the miserable bear.

The Fibonacci resistance levels are 23.6%, 38.2%, 61.8% and 78.6%.  The fascinating thing about the chart above, is that the first resistance level was broken in such quick time after such a horrendous drop.  It didn’t quite make the next 38.2% recovery line, but my money is on a strong recovery when it does break that marker.

In Dow Jones terms, this represents an index of around 22,600 points which isn’t a million miles away.

The market volatility is crazy currently, and the news in the US is very troubling in terms of the amount of fatalities and rate of virus spread. In absolute honesty, markets could take another tumble as the US shuts down and the true effect of the virus starts to be reported in quarterly numbers from companies.

However, we will come through this and there are some strong messages that I want to leave our clients with this week.

I know it is tough right now. We are all locked up like a bunch of grounded school children and honestly I don’t think Lisa or Carys can take much more of my pranks around the house!

You can call me over optimistic if you wish – but I genuinely do not believe that we will all be locked up for another six months as the government advisers are touting.  They have done a brilliant job so far in keeping us safe, but I see a point where the data will turn into positive numbers and we will be let out early for good behaviour!

Look after yourselves and remember that we are here for you 100% if you need anything at all.

My best wishes as ever.